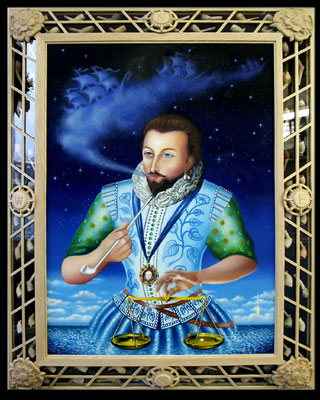 This series of paintings will be permanently housed in Mount Orgueil Castle. A magnificent medieval edifice situated above the picturesque town of Gorey on the island of Jersey. The work came about when artist Gordon Young asked me, on behalf of the government of Jersey, if I would be interested in getting involved in the Mount Orgueil project. This project is an attempt to house a museum, dedicated to the medieval period, within the castle. It is scheduled to open on the second of April 2006.

The medieval mindset was one of locational certainty; firstly the certainty of one's physical location, i.e. your house, your village, your country and your country's distance from the centre of the world (Jerusalem). The second certainty was one's location in the secular world i.e. where you were placed in the social hierarchy. The latter was an absolute because there was no movement in the rigid social structure. Even more important than these was one's location in the celestial afterlife. If you gave a priest the details of your life he could tell you which particular plateau of purgatory you would be delivered to when you died. It is easy for modern man to scoff at such tomfoolery but it has to be remembered that the life of the average medieval person was both harsh and brief. The comfort of such structured certainty provided a tremendous blessing. It is ironic that, today in our ever-changing society there is a growing movement towards simpler living. Many people yearn for a life that does not constantly change, a life where one is not expected to continually adjust. The problem with this romantic vision is that when you ask these particularly lost souls to give up their electric kettle, the sheen of the Middle Ages somehow gets ever so slightly tarnished.

After some intensive reading and a visit to the castle I decided to create an installation investigating the life of the Elizabethan hero Sir Walter Raleigh. Raleigh, a former governor of the island, was the ultimate renaissance man. He shared a world-view that brought about the end of the medieval period. In 1600 Queen Elizabeth the First of England sent Raleigh to Jersey with instructions to demolish Mount Orgueil castle. He was supposed to use it's stone to build a bigger, more defensible castle. But when Raleigh arrived on the island he realized that Mount Orgueil was worth saving and sent a letter to the Queen stating. "It is a stately fort of great capacity and I consider it a pity to cast it down" He then proceeded to build another castle, Queen Elizabeth castle, in St Helier the capital of Jersey.

The outward influences that were instrumental in dragging the deadened and superstitious medieval-mind into the shining light of the Renaissance are well documented. In Europe the authority of the church began to falter when books by Pre-Christian philosophers became available, leading people to question the church's authority. But in order to fully comprehend the real catalyst for this remarkable change you have to look inside the minds of men like Raleigh. He was a supreme example of the type of thinker who flourished at this time. In the National Portrait Gallery, in London, his portrait bares the inscription *"Sir Walter Raleigh, the Consummate Renaissance Man."* He excelled in numerous fields and was able to cross between the disciplines of art, science and philosophy with ease. Such a proficiency in study exemplifies the Renaissance man. The ability to comprehend and bring together many disparate ideas enabled him to formulate a worldview, which had eluded many great medieval intellectuals. Raleigh was not afraid to undertake daring deeds and dream of glorious multifaceted worlds, which lay just beyond the horizon of conventional thought. He could comprehend a future world that was not a preordained construct. A future world, which was in a constant state of flux and therefore open to the influence of secular thinkers. Christopher Marlow described Raleigh's thought process in this verse.

Our souls whose faculties can comprehend
The wondrous architecture of the world,
And measure every wandering planet's course,
Still climbing after knowledge infinite,
And always moving, as the restless spheres,
Will us to wear ourselves and never rest.

Given Sir Walter Raleigh's connections with Jersey it seemed more than appropriate to include his inspirational life story in the Mount Orgueil Castle project. My installation will consist of six history paintings and a twelve-minute animated film illustrating his life. The paintings are an attempt to shed light on the visionary thinking, and diverse endeavors, undertaken by one man at the end of the medieval period. I used the book, *"That Great Lucifer, A Portrait of Sir Walter Raleigh"* by Margaret Irwin, as my main point of reference.

The epic cinema of today can be seen as the history painting of the past. The key difference between cinema and painting is the way in which time is utilized to read each medium. I have always been fascinated by the way time seems to be condensed within a painting. An average movie runs for ninety minutes whereas a painting is not perceived to have any linear time frame. I am intrigued by the idea of viewing a painting as a concentration of the cinematic experience, as if the whole film had been condensed into one still frame. I have approach the Raleigh paintings in this way. Using a cinematic aesthetic I have isolated one aspect of Raleigh's life into each painting. My intention is to try and show the inner workings of a true maverick spirit completely embroiled in the zeitgeist of his day. In regards to the visual style of the paintings I have paid homage to past masters (in particular Carlo Grivelli) whilst retaining a distinctive modernist sensibility by deriving the preparatory drawings from computer-aided designs.

The intention behind the picture frames was to create a synthesis of medieval and contemporary styles. Each medieval picture frame was unique to itself, they were all hand-made and usually rather intricate in their construction. For the Raleigh paintings the cabinetmaker maker, Jonathan Car-Hopkins, constructed the basic frames using American-ash and I added the carvings, also carved from American-ash. The glass inserts were made from laboratory glass backed with painted card.

The Elizabethans were passionate about the, newfound, craze of smoking tobacco. Although Raleigh did not, as is widely thought, introduce the wicked weed, he was instrumental in making it fashionable at court. A good example of the romantic rhetoric heaped upon tobacco at the time, can be seen in this verse by the famous madrigal composer, Thomas Weelkes:

I swear that this tobacco
It's perfect Trinidado ...
Fill the pipe once more,
My brains dance trench more
It is heady, I am giddy,
Head and brains,
Back and reins, joints and veins:
From all pains
It doth well purge and make clean.
Thomas Weelkes (1576-1623)

The pipes contained within the frame of the painting are all from the Elizabethan period.

As Sir Walter was fluent in French and an expert in defence, he was appointed to be the first navel Governor and captain of Jersey in 1600. His mission was to demolish Mount Orgueil Castle and use it's stone to construct a more defendable fortress. When Sir Walter saw the magnificent edifice, which was Mount Orgueil, he despatched a letter to his Queen recommending that it should not be demolished. Stating that *"It's a Stately Fort of Great Capacity and if a small matter may defend it, it were a pity to cast it down."*

He then dedicated its replacement in St Aubin's Bay to the Queen, Fort Isabella Bellisima - Elizabeth Castle. He also took this opportunity to appointed a ma^itre de chasses to ensure the protection of his hunting rights on the island. On his second visit to the island in 1602 he continued this work by setting up a court allowing local people to air their grievances. There is a famous case where Sir Walter determined the ownership of Jean Guill's cow. When he presided at a States sitting, the long talked about land register was finally set up which continues to the present day.

In the Court of the Fairy Queen

The Elizabethans had a great love of verse; they produced some of the finest poets ever to grace this earth. William Shakespeare and Christopher Marlow being only the tip of the iceberg. Everyone at Elizabeth's court was expected to be eloquent in his or her use of language. Their culture was charged by the use of verse and playful language and their visual art was full of metaphorical references. Raleigh himself was considered to be a fine poet and a number of his works still exist today. In 1589 Raleigh befriended Sir Edmund Spenser and sponsored the completion of his masterpiece the epic tone poem "The Fairy Queen."

The Quest for El Dorado

In 1595 Sir Walter Raleigh set off on a supreme, Don Quixote-esq, quest up the Orinoco River in search of the fabled golden city of El Dorado. Described by Raleigh as *"A fairy city, built by giants, from gold and silver, on a lake with a thousand bridges in the depths of an as yet impenetrable jungle"*. He went to Guiana in South America in his search for the fabled city. Unfortunately, like most romantic quests, he did not find it. The phrase *"between the devil and the deep blue sea"* comes to mind when trying to comprehend the mindset of the gung-ho seafarers of this period. It has to be remembered that when Raleigh undertook his expeditions more than three-quarters of the world-map were summed up by the phrase *"beyond this point only sea monsters and devils lurk."*

When Queen Elizabeth the First died, Raleigh was accused of plotting against the new King, James the sixth of Scotland the first of England, and was imprisoned in the tower of London. When there he entertained many foreign dignitaries, all-keen to meet the last great Elizabethan gentlemen. He also became the tutor of the heir to the throne, Prince Henry, much to the displeasure of the King. He had apartments built and past his time experimenting in chemistry and wrote numerous pamphlets and books, the most famous being "The History of the world" After spending thirteen years in the tower he was released to lead an expedition back to South America in search of gold to replenish the King's coffers.