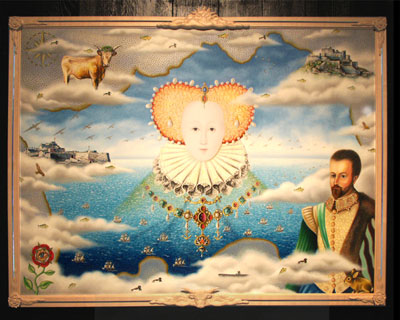 As Sir Walter was fluent in French and an expert in defence, he was appointed to be the first navel Governor and captain of Jersey in 1600. His mission was to demolish Mount Orgueil Castle and use it's stone to construct a more defendable fortress. When Sir Walter saw the magnificent edifice, which was Mount Orgueil, he despatched a letter to his Queen recommending that it should not be demolished. Stating that *"It's a Stately Fort of Great Capacity and if a small matter may defend it, it were a pity to cast it down."*

He then dedicated its replacement in St Aubin's Bay to the Queen, Fort Isabella Bellisima - Elizabeth Castle. He also took this opportunity to appointed a ma^itre de chasses to ensure the protection of his hunting rights on the island. On his second visit to the island in 1602 he continued this work by setting up a court allowing local people to air their grievances. There is a famous case where Sir Walter determined the ownership of Jean Guill's cow. When he presided at a States sitting, the long talked about land register was finally set up which continues to the present day.