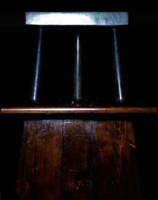 The Cutty Stool commemorates the riot in St.Giles Cathedral when the new 'anglicised' prayer-book, imposed on Scotland by King Charles I, was used there for the first and last time on 23 July 1637. The reading was halted by a stool flung at the minister's head by a woman traditionally known as Jenny Geddes. (Stool of Repentance : a low stool placed in front of the pulpit in Scotland, on which persons who had incurred an ecclesiastical censure were placed during divine service. When the service was over the 'penitent' had to stand on the stool and receive the minister's rebuke. It is said to have survived until at least 1884.) The idea of a sculpture to commemorate Jenny Geddes had been in gestation for some ten years when Merilyn Smith first proposed it to the Hughson Gallery in 1991. The nationalist ferment in Scotland at this time gave an added resonance to the concept, and the Gallery agreed to administer the project. Typically, Smith distilled her extensive research to arrive at the quintessential feature of the Jenny Geddes story - the Stool. In January 1992 she designed the wooden prototype, which was to be cast in bronze. In consideration of the leading role taken by women in the Edinburgh riot, a subscription list for Scottish women was opened in February. Some forty women responded, the money was raised and the Stool was cast in April. The Gallery negotiated with the Very Rev. Gilleasbuig Macmillan, the Minister of St. Giles, on the presentation of the work to the Cathedral. The work was unveiled there on Sunday 23 August after the mid-day service, and was celebrated by the eminent poet Iain Crichton Smith in the reading of his specially written poem 'The Stool'.

The following are also available from the Hughson Gallery:

It is a scholarly summary of an intensely convoluted tale. I recommend this small but meticulous work of social history as an introduction to events which changed the course of Scottish life.

This is a refreshing essay on 1637 and all that, fortified by an introduction by Guilleasbuig Macmillan and a poem by Iain Crichton Smith.

It is a scholarly summary of an intensely convoluted tale. I recommend this small but meticulous work of social history as an introduction to events which changed the course of Scottish life.

This is a refreshing essay on 1637 and all that, fortified by an introduction by Guilleasbuig Macmillan and a poem by Iain Crichton Smith.

So it is the power of the legend, and the forceful symbolism of the Cutty Stool - strong, utilitarian, highly sculptural object - that inspired a contemporary dissident, the artist Merilyn Smith, to make her own commemorative gesture, encouraged and supported by a number of Scotswomen who not only relish the legend, and the original gesture of defiance, but also feel that the anniversary of that successful riot at St. Giles needs commemorating at a time when the Divine Right, not of Kings, but of Governments, must be nipped in the bud.

The bronze sculpture could have been stridently historical, political, feminist, nationalist. It is none of these. Rather, Smith, whose work is characterised by the reduction of the obvious to the quintessential - saying more with less - has chosen to make a 'portrait' of a stool. It's a work of the present but informed by the past. It proclaims both dissent and conviction: a forceful celebration of a simple, defiant gesture…

I first heard the story of Jenny Geddes at primary school. It has stayed with me. Ramsay MacDonald once said 'Our capital must not be a dead museum, neither must the ghosts of the past be banished from our streets. We must be careful of the soul and spirit of the people who created that greatness.' I want it to mark the moment of retaliation when the humiliated dared to confront intolerance, imposition and oppression - and won! The memorial is intended to signal latent strengths.