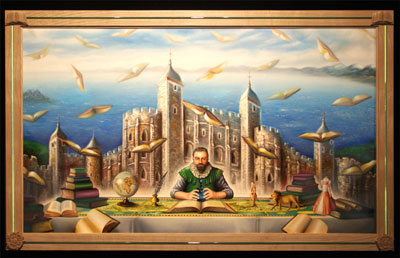 Ronnie HEEPS
In The Tower

When Queen Elizabeth the First died, Raleigh was accused of plotting against the new King, James the sixth of Scotland the first of England, and was imprisoned in the tower of London. When there he entertained many foreign dignitaries, all-keen to meet the last great Elizabethan gentlemen. He also became the tutor of the heir to the throne, Prince Henry, much to the displeasure of the King. He had apartments built and past his time experimenting in chemistry and wrote numerous pamphlets and books, the most famous being "The History of the world" After spending thirteen years in the tower he was released to lead an expedition back to South America in search of gold to replenish the King's coffers.