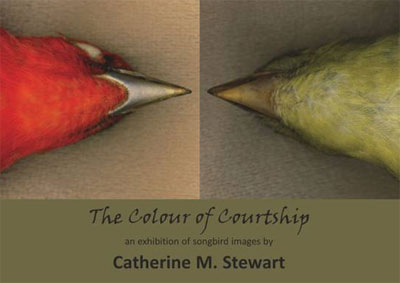 Using songbird specimens from the Beaty Biodiversity Museum at the University of British Columbia, this Vancouver-based artist explores the vast spectrum of colour that is known to play a significant role in the courtship rituals of many species - a topic that Charles Darwin described extensively in his publication *Descent of Man and Selection in Relation to Sex* (1871). This series of lush and sensuous images magnify details in avian plumage and reveal a multitude of rich and varied hues that combine to create the overall colours, textures and patterns observed when viewing birds in nature.

While sourcing material for a previous series, I had the good fortune of being able to access the biological collections at the University of British Columbia. I was captivated by the contents of storage drawers full of carefully arranged specimens and amazed by the highly rigourous nature of zoological curatorial practice. The colourful song bird collection was particularly breathtaking and became the 'raw material' for this series.

I chose to focus on the colour differentiation between the sexes - a topic that Charles Darwin researched and described extensively in his second book on evolutionary theory Descent of Man, and Selection in Relation to Sex (1871). This series of photographic images magnify details in bird plumage and reveal a multitude of rich and varied hues that combine to create the overall colours, textures and patterns observed when viewing birds in nature.

Traditional wildlife imaging, including scientific documentation of bird species, is usually done through careful hand rendering or telescopic photography of live creatures in natural settings. Breaking away from these traditions, these 'wildlife' images are of museum song bird specimens arranged outside the context of nature. Their deceased state and poignant silence bring a sense of pathos to the work and act as a reminder that the sight and sound of songbirds may become a rare experience as avian populations across the planet plummet because of environmental degradation. Yet, there is also a sense of hope - a fragile hope, conveyed by the presence of eggs, some broken, some not.

These images of carefully prepared specimens with their tags filled with detailed information allude to the painstaking nature of research in the zoological sciences - the kind of precise and disciplined work that led Darwin to his ground-breaking insights. However, the predominant theme that surfaced in this body of work over the course of its creation became the ceaseless, tragic, yet beautiful cycle of sex, birth, life and death that plays out for all species in response to both intrinsic and external forces and the underlying laws of nature - laws that Charles Darwin sought to uncover in his life's work.

The Colour of Courtship was designed for and exhibited in conjunction with the Cambridge Darwin Festival under the auspices of the New Hall Art Collection at Murray Edwards College, University of Cambridge, in July 2009.

I would like to acknowledge the generous assistance of curator Dr. Rex Kenner of the Cowan Vertebrate Collection in the Beaty Biodiversity Museum at the University of British Columbia.

Catherine Stewart first exhibited in Cambridge in 2002. Two suites of prints, *Copernican Notes* (using pages from *Revolutionibus Caelestibus*) and *Elements of Grace* (inspired by diagrams from Isaac Newton's *Principia Mathematica*), were shown at the Isaac Newton Institute for Mathematical Sciences. *Copernican Notes* was shown in 2004 at the Edinburgh Printmakers Gallery, to co-incide with the Edinburgh International Science Festival; and at the Glasgow Science Centre (in association with Hughson Gallery).

Since then Stewart has completed a further suite of prints titled *Natural Affinities* - inspired by Charles Darwin's *On the Origin of Species*.

*The Colour of Courtship* is available for exhibition in the UK following the Cambridge (Murray Edwards College) showing 5 July - 1 August 2009.