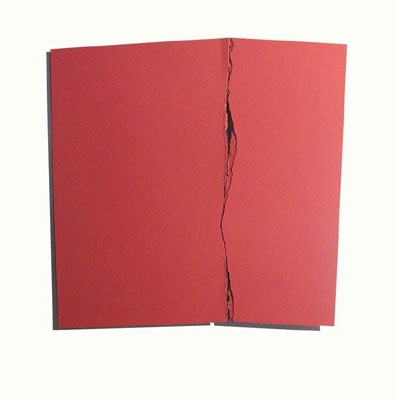 The 'Cascade' series of paintings came out of a commission for the French Ministry of Culture, to create 17 stained glass windows for the cathedral St Pierre in St Claude in the Jura. The principal element in this work is a red square that tumbles along each side of the building in a continual circuit of re-birth and rhythm.

However, I felt that I could not continue to work with such simple geometric symbols and I felt the need to introduce a more organic element into my work. At a certain point I arrived at the idea of the dynamic breaking of the work area. A kind of occidental version of the Zen principal of energy in Japanese and Chinese calligraphy.

The edges that I achieved reminded me of the rock formations that I see every day where I live in the French pre-Alps. These natural forms are more often than not arrived at by hazards of nature. It was the accidental landscape that interested me.

I then re-assembled the pieces as constructions. The working principals of my previous work remained but I now found a visual aspect that pleased me, on both the intellectual and aesthetic level. I re-discovered through these works scenes that I had kept in my head over many years. The broken edges descend like the many small burns I had seen whilst on the Isle of Skye for an installation project in Portree. Thus the idea for the name 'Cascade' (waterfall in French) for the series.

This work features in the TWENTY exhibition.