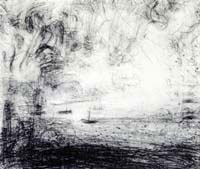 Anyone intimately connected with the geography of Argyll will be as familiar with its sweeping statements and its generous horizons as with its valleys laced with history and its quiet, contemplative coves. It is a rich and varied territory. In the evening light of summer, Loch Fyne can appear as classical as anything painted by Claude but in 1802 it was the mountains beyond its head which wonderfully engaged Turner's eye. Further west, its rocks and strands and running tides have inspired MacTaggart in Kintyre and Peploe on Iona.

The road which leads to the island of Luing leaves the A85 some dozen or so miles south of Oban, and the journey south to Cuan Ferry is long enough for this little-known other world to work on the senses, preparing them for sudden revelation more than recognition. Edna Whyte has lived on the edge of Cullipool since 1967 and her artist's eye has been tuned for months and years to the dramas of light, wind and water which play out before her studio window. She returned to full-time painting in 1990 after a career as illustrator, teacher and restaurateur, and her calibre as an artist and the range of her visual experience have nowhere been so exercised or so evident as in this ongoing series of pencil drawings which have their origins in the transient Atlantic swells around Luing and on the Firth of Lorne and Loch Fyne. Like many distinguished names before her - Turner and Van Gogh, Fergusson and Mackintosh - who have been drawn to the Mediterranean, she returns every year during the winter months to the Algarve, where she paints the endless activity of its fishermen shimmering in a glow of almost-white light.

Turner's explorations into 'the nature of light' (Kenneth Clark, Landscape into Art, 1949) were founded in colour, with its more direct access to the emotions. Whyte's use of graphite (in a range of pencils from 4H to 9B) on paper and her complex linear vocabulary combine to produce works which are as challenging in structure as they are remarkable in their visual and emotional intensity. She is engaging with light as it defines the world she sees, and as it affects her responses. She is tethering the energies of flux and flow to the paper's surface. As spectators, we are swept up and into the drama.

Drawing - mark-making, she would call it - is Whyte's primary interest, even before painting, and her sketch-books bear witness to a mind in a continual state of observation - of people, clouds, land-masses, moored boats. The Buttery Restaurant and Gallery which she ran on Luing with her business partner Audrey Stone from 1977 until 1990 was an ideal venue in which to register the eternal human drama of couples of both sexes interacting in conversation and gesture. To return now to her woodcut illustrating the Marquis and Griselda from the Clerk's Tale (The Folio Society 1952, Chaucer, The Canterbury Tales) is to realise that her Couples, although painted in modern dress, have been on her mind for many years, and as with the weather, the slightest shift in tone or nuance can indelibly affect the interpretation. Light and movement, energy and action are what she is about - a kind of cosmic alliance which binds the artist as much as the subjects she paints.