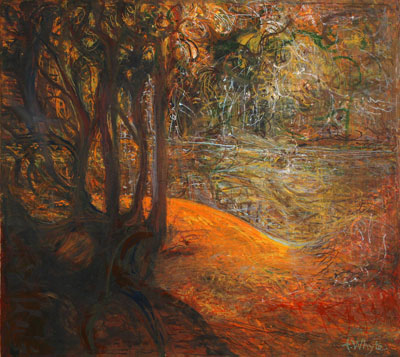 Edna Whyte lives and works on the island of Luing, south of Oban in Argyll. Born in 1930, she studied at Kingston College of Art and the Royal College of Art in London. On completion of her studies, she was awarded scholarships by Punch, the Salzburg Seminar In American Studies, and the Goldsmiths' Company, London. She then worked as a book designer and illustrator (for the Folio Society publications., and the BBC); taught at the Merchant Taylors' School for Girls (Liverpool), and lectured at Edgehill College in Lancashire. She co-directed the Residential School at Achnamara, Argyll with Audrey Stone, her business partner. During the 1970s and 1980s she established a Design, Prints and Graphics business known as Old Rectory Designs, and with her partner ran the award-winning Buttery Restaurant and Gallery on Luing. She began painting again full-time in 1990.

Earlier exhibitions were shown at the Folio Society gallery in London. Since 1990, she has exhibited with Judith Paris and Richard Demarco in Edinburgh; with the Hughson Gallery, the William Hardie Gallery and the Lillie Art Gallery (solo exhibition in 1995) in Glasgow; and with the MacLaurin Gallery in Ayr (1993, 1996, 1999). Her work has also been shown (December 1998 - January 1999) at the Centro Cultural, Sao Lourenco, Almancil, Portugal. This gallery holds her work.

The north-western Atlantic shore has dominated my life. Once seen, a powerful motivation came to live here, on a particular few metres of shore on the island of Luing, where I could observe and saturate myself in the glorious, unrestrained celebration of the elements, outward from the primeval slate shore, and beyond into infinite light and space; in the lyrical play of scintillating, sweeping light and colour within the incessant flux and flow of motion; in the sun's power, the radiation penetrating through and around vapour, through wind-born cloud formations; in the movement of tides, the constant lowering and raising of the horizon by the tide's movement. The motions of this constantly changing beauty, the energy of its creation, excites in me the need to create works that are fluent with it.

The painter's 'visual muscles' are still being flexed, so to say, because it is still in her drawings that Edna Whyte's calibre is most clearly demonstrated - not least in the large works on paper where line alone is the expressive medium, used in a near-abstract manner to express the activities of air and water, wind and light and vapour on and around the islands, and the excitements this activity arouses.

An exciting variety of works from the winter sun of Portugal and the brooding island landscapes of Argyll competes for your attention, but, like critic Cordelia Oliver, I am strongly drawn to the latest experimental drawings.

Edna Whyte has taken responsibility for the wind and weather and the process of time passing through the elemental stuff and substance of Luing. Her pencil drawings celebrate the daily wonders of nature at the north western Atlantic rim of Europe, defining the Celtic vision of 'TIR N' AN OG - the Gaelic land of the ever young', where time touches eternity.

Edna Whyte's visionary drawings show you don't need colour, only a pencil to recreate the elemental flux of sun, wind and weather around Luing. Whyte's linear concentrations evoke rhythm and movement. Sometimes it's as though one is on a speedboat roaring towards her island home through spray and swell, the sun in one's eyes.