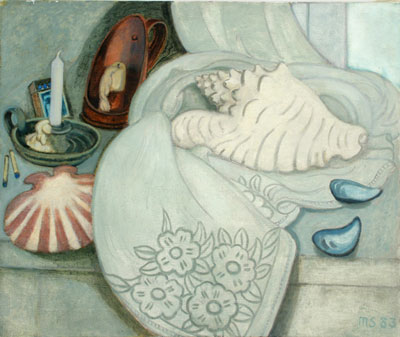 During the early years of the 1980s, Margot Sandeman spent time at her bothy in High Corrie on the east coast of the island of Arran working on a series of still-life paintings. The objects at her disposal were simple - jugs, candles, shells both local and exotic - the larger of these having found their way to Corrie via the nets of local fishermen. The paintings varied in scale and format, and were the genesis of future explorations of the still-life genre. Some of these new works were seen by Ian Hamilton Finlay, with whom the artist had frequently collaborated, providing drawings to accompany poems for his periodical *Poor.Old.Tired.Horse* and for poem-cards published by the Wild Hawthorn Press. Already in the early seventies, Sandeman had collaged printed texts to landscape paintings. Finlay's new proposal for a series of paintings using texts which were subsequently published as *A Concise Classical Dictionary* (Wild Hawthorn Press, 1988) presented few obstacles to her. Her mind was already focussed on visual poetry. Her compositional skills - a legacy perhaps from her mother, the embroiderer Muriel Boyd - had been commented on and envied by Joan Eardley, Sandeman's close friend from student days at Glasgow School of Art. This collaboration produced some forty paintings, of which three are included in this small exhibition. (See *Sackcloth, Nut* and *Sheaf* - the texts follow the images).

These relatively early still-life paintings speak of cottage life and of a degree of reverence for the objects at their centre. Sandeman continued to use the same jugs for almost two decades, and they still feature in her Glasgow studio. Finlay's 'small column crowned with ellipses' is perhaps nowhere better described than in a later series of works, of which *Mushrooms and white jug* (1992) is one example. The rural idyll of Little Sparta and that of High Corrie have many elements in common.