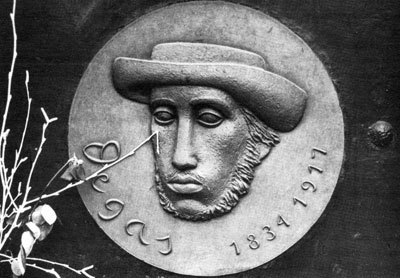 Photogravure is a method of photo-engraving by the action of acids on a sensitized surface. The image is transferred by means of light passing through a photographic transparency onto a light-sensitized printing surface (usually a copper plate). In order to obtain gradations of tone, a fine dust grain is introduced to break up the image into areas of varying densities. Photogravure is an intaglio technique comparable to etching. It was a result of the discovery that light-sensitized gelatine hardens and becomes insoluble in water in proportion to the amount of light which falls on it. It was known around 1840 that dichromates in combination with certain kinds of glue become light sensitive, and c.1850, Henry Fox Talbot discovered the light sensitivity of a gelatine-dichromate mixture. The technique has in the past been widely used in the reproduction of works of art. Creative practitioners include Alfred Stieglitz, John Heartfield and James Craig Annan. Roschlau is one of the very few artists in Britain currently using photogravure.

This series of photogravures presents the tomb-stones of painters of nineteenth-century France which are to be found in the famous Cimetiere Pere Lachaise in Paris. (Only Degas is buried elsewhere - in Montmartre - and of course Modigliani and Max Ernst belong to the history of the twentieth century.) This is a tribute to a city which has been a source of inspiration for so many, in its reign as European City of Culture.

The Sacro Bosco, or sacred grove (or monster park, to give it the name adopted by twentieth century tourism) of Bomarzo is located within the grounds of the Villa Orsini, and Bomarzo itself is near Viterbo, to the north of Rome. The sculptural complex which constitutes the grove cannot with certainty be attributed to any one artist, but its present owner, who has contributed much to its preservation, assumes along with other authors the involvement of Pirro LIGORIO (1520-83), architect, artist and garden designer, who undertook the completion of St Peter's in Rome on the death of Michaelangelo. Ligorio was the principal designer of the gardens of the Villa d'Este at Tivoli, which were begun in 1550. The sculptor Annibale CARO is also thought to have been involved. The sculpture at Bomarzo was carved largely from the live rock on the site, in the 1560s, for Prince Vicino Orsini.

Laurence Scarfe wrote (1961): 'The way to the Sacro Bosco is over a pathless carpet of wild flowers.... through a screen of trees we go to the brow of a hill and then, looking over, we are astonished by a nightmare landscape. A menagerie of gargantuan statuary has sprung from the boulders of the glen - an elephant, winged dragons, lions, hounds, fish heads, nameless monsters: giants and giantesses among a wealth of great urns and ornaments; and beyond in the wood, further monsters by the stream bed and a house purposely built at an angle leaning backwards into the hillside....'

The planning of the garden is deliberately random, and the symbolism is used idiosyncratically: many of the subjects found here had not hitherto been used in garden sculpture; on the other hand we find Proteus, Pegasus, Venus, the Three Graces, Neptune, Hercules, Ceres, Cerberus and Prosperina. The temple close by is assumed to have been built (after the grove) as a mausoleum for Vicino Orsini's wife Julia, who died c.1563. Explanations of the grove err, for want of evidence, towards the conjectural; Scarfe obviously relished the resurgence of the irrational in an age where art was largely controlled and rational. He concluded that it represents the underworld - a memorial which is to be understood as supplementary to the mausoleum. Christopher Thacker (THE HISTORY OF GARDENS, 1979) calls it the 'Zimbabwe' of gardens, and claims that the atmosphere of the place is reminiscent of Francesca Colonna's HYPNEROTOMACHIA POLIPHILI (published in Venice 1499 - and in English, under the title THE STRIFE OF LOVE IN A DREAM, in 1592). The work describes the dream-vision of Poliphilus, who, driven by his love for the beautiful Polia, passes through many fantastic scenes: wild forest, ruins, a stepped pyramid, dragons, enigmatic sculptures, colossal and perplexing statues, lavish palaces and pastoral and garden scenes are described and illustrated by woodcuts. The book influenced many sixteenth and seventeenth century architects, writers and artists, for example Rabelais, Spenser, Shakespeare and Bernini, all of whom borrowed its ideas and images in different ways.

The present owner, Giovanni Bettini, argues that the Sacro Bosco celebrates life and its triumphant re-birth every Spring just as it was celebrated by the classical world through the two great and inseparable myths of Mars (Hercules) and Ceres (Prosperina): both recount the union of the dead with the renewing forces of nature.