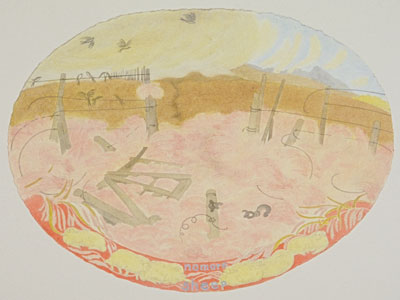 An exhibition in celebration of the artist's eightieth birthday.

By the early seventies, Margot Sandeman's artistic career was moving into a new phase. Almost a decade had been devoted to her young family, and in 1963 the tragic early death of her student friend and artist colleague Joan Eardley had brought to a close a friendship in which the sharing of minds had been uppermost. She was discovering a freedom to explore her own unique talents, and with her children at school, was able to spend daytime hours in the studio.

Eardley and Sandeman had spent many weeks and months working together after the war years and during the early fifties at Corrie on Arran. They were equally committed to painting, and bounced ideas off each other. A sketchbook of sheep drawings by Sandeman - now in the archive of the Scottish National Gallery of Modern Art - was 'finished off' by Eardley; and their correspondence points to a continuing exchange of thoughts about painting. Early oils of sheep by Sandeman bear a close resemblance in their handling to contemporary work by Eardley, but it is in her drawings that one finds a different sensibility. Eardley herself acknowledges the difference between them: 'I feel that when you draw you see what you're doing as a drawing, don't you.' And later: 'Your thing of the sheep caught in a thicket sounds first class.' While on her travelling scholarship in Italy in 1952, Eardley exhorted Sandeman to spend more time on Arran : 'And for you Corrie is necessary now. One has got to be content where one is and not want to be somewhere else or one can never paint, I think.' Eardley was typically generous in her comparisons: 'The thing is that I never produce anything which has anything like the intensive complete feeling which your paintings have. Mine are much more only just scrappy sort of notes - sort of journalistic.'

Sandeman had known and loved the Arran landscape from childhood, and the works in this exhibition indicate a poetic response which long familiarity has honed and defined. Most of these works were painted from memory in the studio, and seem if anything to offer a parallel to Wordsworth's definition of poetry as 'emotion recollected in tranquillity.' Sandeman herself makes the distinction in the work titled 'Philosopher' (cat. No 9). The figure on the right represents Poetry, and, eyes closed, her mind is absorbed and meditative. On the left, the enquiring Philosopher is, in contrast, wrestling with a book. Sandeman's responses have been filtered through all the senses; her paintings seem to breath air and the grass of her fields has a palpable quality. The torn edges of the paper give emphasis to the line of the horizon, or focus on the fallen gate. 'No More Sheep' records the time when the Corrie flock was moved to the neighbouring territory of Sannox because the shepherd, then in his nineties, was no longer able to look after it. The fences, hitherto held together with bits of wire and string, have collapsed, and the gate has sunk into the grass.

Her highly intuitive vocabulary of form - sheep, rocks, trees, foliage - continued in drawings for Ian Hamilton Finlay and the Wild Hawthorn Press, as well as in her paintings. As early as 1949, the Scotsman's art critic commented 'It is impossible not to recall William Blake when looking at Miss Sandeman's religious themes. But this is due in no way to any superficial resemblance, of which there is none. It happens because Miss Sandeman's imagination has the same authentic quality of the waking-dream that Blake possessed. In her..you will find the true perception of the 'innocent eye' as distinct from the false naivete that so often deplorably apes it. Apart from their intensity of mood..these are designs of originality and distinction.'

In 1952, Joan Eardley wrote 'I have been so lucky in having you as a friend that I forget that people aren't like you.'