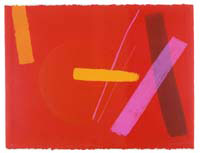 Barns-Graham (1912 - 2004) was born in St. Andrews and educated at Edinburgh College of Art (1931-37). She moved to St. Ives, Cornwall in 1940. From 1973 she worked in Cornwall and St. Andrews. Her productivity as demonstrated by exhibitions in London and recently at the Tate St. Ives was astounding. A highly successful collaboration with Carol Robertson at Graal Press in Midlothian produced a series of screenprints (Another Time is one of this series) which relate closely to her recent paintings. Both 'feed off the world about us, and are some of the most vital and original works of abstract art to have been produced in 20th century Britain.' (Iain Gale, Wilhelmina Barns-Graham, New Paintings, 1997, Art First, London.) Gale places her with the original St. Ives modernists - Nicholson, Hepworth, Gabo. Celebrating her 85th birthday in 1997, Barns-Graham said of her art 'I feel free to take risks, using as broad a brush stroke as I like, or as colourfully... (being) aware of a sense of urgency, hoping to achieve a simple statement in form and colour.'