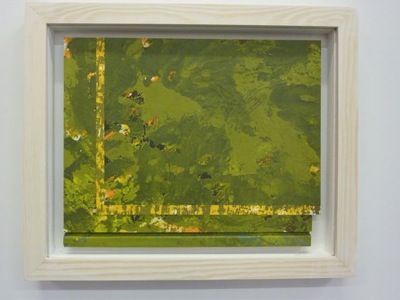 As artists we must always look for and find still another way.
Stuart Mackenzie
Leaving Jericho
The John David Mooney Foundation, Chicago 2003

In October 2010 I was fortunate enough to undertake the R.S.A. Members Residency at South Lochs on the Isle of Lewis.
Residencies, with all the implications of observing and working in an entirely new environment, invariably present an artist with a fresh challenge of response. My objective was “to establish the beginnings of a new body of works whose collective imagery derives directly from the sense of place”.

My first requirement was to clarify for myself exactly what it was that promoted a response and how, once defined,that could be factored into the making of new work. In the past I had always addressed this issue instinctively, acknowledging my own interest in how, within landscape, nature ultimately retakes and visually enriches the image.

As things turned out, my entire time on Lewis was spent travelling, looking and photographing. It was only after returning home to my own studio that memory and accumulated documentation prompted the actual process of making. What had continued to resonate with me most potently was the plethora of variegated surface and texture that I had witnessed on Lewis. It was the quality of surface rather than specific image that had stayed with me.

I began experimenting over a period of weeks with a new, for me, methodology of monoprinting, all very low tech and hands on. I explored direct surface combinations of colour and texture. The qualities of these combinations were conditioned by a range of factors: paint consistency and loading, weight and type of paper, pressure of printing and the varied physical means of colour transference from surface to paper. This ultimately provided a generous stock, effectively both my palette and my working sheet material, which could be put to work through a combination of construction and collage.

Ultimately, of course, I found that I was walking a path that I had inevitably walked before; attempting to embrace the potential inherent in the language of both painting and sculpture in the pursuit of a new physical reality.

I made about twenty small reliefs, two larger works, both essentially flat in their format, and a suite of six works exploring yet another means of construction. Also two small minimal free standing sculptures deriving from the ubiquitous ad hoc use of containers that I had witnessed on Lewis.

The works are ongoing… within the matrix of controlled geometry, low relief construction and organic surface rendering a myriad of new possibilities present themselves for use or dismissal.