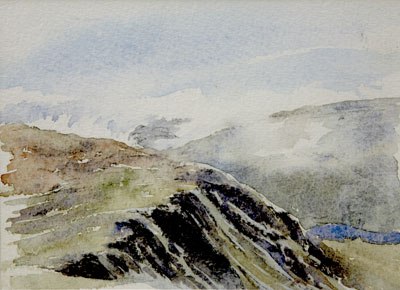 A retrospective tribute, to which friends are cordially invited on Tuesday 21 October, 6.30 - 9pm (or by appointment until Friday 24 October).

Colin was a wonderful friend, an engineer who worked in the oil industry and latterly in hospital management; a committed ski-er and mountaineer who loved to paint. The gallery is honoured to have his watercolour landscapes from the nineties until his untimely death in February 2003 on the walls for this brief period.

Colin was preparing his first exhibition when he died. He discussed in the days before his death how he would like the paintings presented and by whom the paintings should be selected, his good friend Joan Hughson and his brother Ralph.

Colin attended Glasgow School of Art evening classes for nearly 20 years. Originally he used oil paints as his medium but moved on to watercolours which he preferred. His inspiration always came from the Mountains, primarily in Scotland but also great ranges from around the world, Norway, Spain and Nepal.

This exhibition is of pictures done over the course of his painting career. Early ones are pure water colour but in later years he developed a technique combining water colour with charcoal. His eyes sparkled with delight when he first tried this technique which solved for him a problem of conveying the texture of rocks and snow.

Although he did numerous sketches in the field his pictures are all from photographs taken during walks and camping trips. Sadly he did not name any of the pictures and although we can differentiate Scottish, Norwegian and Himalayan scenes we cannot name the individual hills although many of you who are keen hill walkers will recognize at least some.

Although the paintings are not for sale some have been reproduced as cards which are for sale at a minimum price of £1.50p each, proceeds to go to UNICEF a charity he always supported.