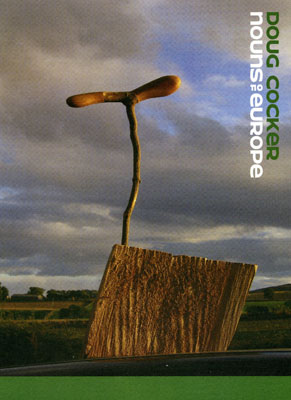 In the four decades Doug Cocker (born 1945) has worked as a sculptor, he has sought to engage with ideas and themes beyond the local or national. In that well-established tradition of creative Scots embedded in their own culture but still possessed of an international perspective, Cocker has woven together the varied strands of his own upbringing and artistic experience with the traditions of European modernism.
In this exhibition, the first in the Mackintosh Gallery dedicated to sculpture for several years, Cocker used his receipt of a Scottish Arts Council Creative Scotland Award to travel to key cities such as Copenhagen, Rotterdam and Hamburg which mark boundaries of the North Sea and the Baltic. His engagement with these different territories has not resulted in literal translations of his experience, but rather has inspired new approaches to form and construction.
Clear development can be seen in Cocker’s work of the last few years, with a move towards more varied textures in construction while achieving renewed clarity and focus in the forms employed. Drawing is central to the approach, his volumetric style well-suited to the exploration in two dimensions of ideas which will ultimately be translated into three dimensions. Formed with technical precision, the works betray both robustness and fragility, seeming almost aggressive in the resolution inherent in their forms, yet intriguingly complex in the means by which they have been executed.. Usually with wood as the primary material, they engage with the natural world while also expressing high levels of craftsmanship and finish.
Perhaps the latent story behind these works is that Cocker has been on a lifetime artistic quest for balance, as though his works were a means by which he could achieve a kind of certainty, resolution and even perfection when set against the frustrations, disappointments and compromises of the external world. At one level his sculptures act as his bulwark against the inexorable passage of time. Cocker’s most powerful works have the look of objects that are entirely themselves, they seem as though they could not have been configured in any other way. Each element interacts with every other as though in perpetual dialogue with its own context, just as the artist is in habitual interaction with his own experience and imagination.
Looking back at Cocker’s achievement as a sculptor, what comes across forcefully is his sheer inventiveness in creating new forms. Often combining machine-like precision with organic shapes, he succeeds in providing potent analogies to human engagement with nature. He does not merely replicate things he has observed, but by force of imagination turns them into objects which seem to possess the power of natural sctructures or ancient symbols. The works allow freedom for viewers to construct their own meaning out of the language and ideas expressed. There is, then, a humility at their core. Cocker does not demand that we see things solely in one way, but presents an opportunity for reflection on the possibilities of the human imagination.

Doug Cocker was born in Perthshire in 1945. He studied sculpture at Duncan of Jordanston College of Art, Dundee and subsequently spent time in New York and Greece on an Elizabeth Greenshields Foundation Scholarship. He lectured in various colleges of art in the UK, Canada and USA from 1972 until 1990.
He has undertaken numerous commissioned public sculptures in granite, steel and bronze. Wood, however, has always been his material of choice in the studio. His sculptures are an amalgam of traditional construction methods and sculptural logic, resulting in a wide array of configurations, both wall- mounted and free-standing.
Cocker has worked extensively throughout Europe – in Norway, Ireland and Malta, and more recently in Hamburg, Rotterdam and Copenhagen as a beneficiary of a Creative Scotland Award which led to the exhibition Nouns of Europe, presented in the Mackintosh Museum of Glasgow School of Art in November 2006.

My sculpture evolves in response to the phenomena around me. These may be physical, as manifested in landscape, whether rural (Eight Horizons, Landsongs, Fast Landscapes) or urban (Nouns of Europe). Or they may be more metaphysical, addressing the dynamics of music and movement (Tarangalila, the Mad Carpenter's Last Moondance). Sometimes the platform is one of socio-political observation (Wee George, Scotland's shoe) and sometimes simply a celebration of formal fecundity (Speaking in Tongues, Diaspora series).
What remains constant is that once a body of work is embarked upon, it moves forward in response to its own self-generated language, testing inputOptions.for 'the imagined to join the real'.
Early in 2006 I had access to a 500 year old yew tree which had been felled locally. Out of this came two new bodies of work: Zoo Jazz, a kind of personal pantheon, a tribute to jazz musicians whose playing I have enjoyed so much over the years. Ten works were completed, each about 50 cms high.
Also a body of 15 smaller works, made fairly directly and without the time-consuming carved elements of the Zoo Jazz suite. I addressed these as working models, envisaging them as outdoor sculptures, follies with a daft grandeur and requiring the inevitable modifications in their construction demanded by new scale and material.

It is interesting that Doug Cocker's sculptures very often have a graphic dynamism about them. They hum with a tension which has its origin in drawing, in the mental effort to grasp a possibility, in testing out how such and such a thing might be made. Drawings are provisional; sculptures are not.
The process of making sculpture is one of attaining to a sort of certainty, where the imagined joins the real. Although Cocker is sceptical towards his drawings in the sense that they prove nothing until it is made, drawing is still the foundation, the drawing-out from the imaginary complex into the visual world. Drawing is a field for invention but sculpture, the reality-principle, imposes its own more disciplined regime. Through the act of drawing is found the idea and then the family of ideas engendered from the first. The sculptor's drawings give an insight into the creative process, revealing the templates of his visual imagination, showing the forms which resonate with special power for him, and from which he distils the typology of forms which appear in his sculpture.
…the sculptures are abstract and formal in a particular way. They are not formalistic in a strict sense although formal qualities are essential to their effect. They are rather often allusive or associative especially in relation to landscape, but all are treated as emanations from the subconscious which attributes to them an aura of special meaning which could be called their psychological or expressive authenticity. Even the most pared down of his forms are imbued with this quality. They belong to a particular visual world which he has made his own, which with experience the viewer can recognise and share. It has roots in modernist sculpture and --crucially – in the environment in which he grew up and still lives and works. Even when closest to a landscape theme, though, his sculptures are not representations but translations into an analogous sculptural language. They 'belong to' or are 'of a type with' their visual-spatial environment; they carry in their form their affinity with the landscape of their making.