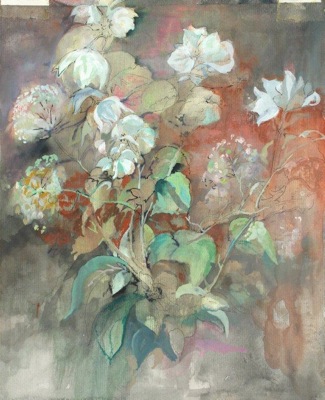 Graham Murray was born in Glasgow and studied at Glasgow School of Art. He lived and painted in France, Turkey, Switzerland, Germany and England until 1938, when he returned to Glasgow. During the war years he taught in Clydebank, and here he first made the acquaintance of Stanley Spencer, who was appointed official war artist on Clydeside. The two artists became good friends, and Spencer was a frequent visitor to Murray's spacious flat in Landsdowne Crescent, and to the Pewter Pot.

Murray exhibited with Leicester Galleries and Reid and Lefevre in London and with the Portico Library in Manchester. In Scotland he exhibited with the Greenock Arts Guild, and with the RSA and RGI. His futurist cityscapes marked his individuality; but when he left Glasgow in 1985 to live in Berkshire with his second wife, his landscapes and flower studies were a complete sell-out at a farewell exhibition. He is represented in the Art Gallery & Museum, Kelvingrove, and in numerous private collections in Britain, Canada, Switzerland, the USA and Australia.