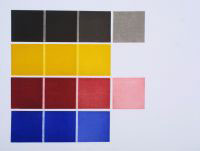 Reeves' work today is the result of a long-developing vision. It is as crucial in its 'rightness' as the engineering of a bridge.

He works by a process of reduction, of isolating the essential ingredients of his subject, distilling it down and re-building the image around it. The result is a very subtle sort of art that works very slowly on the brain. They are contemplative images, lingering and very satisfying.

Reeves commands 'open sesame' to new experience. He is more linear than that other magician Howard Hodgkin, creating his effects by more structured orchestration, but the music they make come from the same poetic sources.

Almost oriental in subtlety, mentor for many modern artists.